In June 1994, Adomas Klimavičius with “Šiauliai Plentas” AB (road construction company) Chief Engineer Algimantas Mikšis participated in the LKL (Lithuanian Basketball League) board meeting, where presented video footage about Šiauliai city infrastructure, budget, team structure, coaches. After that, the members of the Board voted: ten out of thirteen voted in favor of admitting the “Šiauliai” club addition to LKL. The first interview of the club general manager Adomas Klimavičius and the head coach Antanas Sireika

Club logo created by Jonas Mockevičius. Later it was improved by Domantas Klimavičius.

After a successful debut season in the Lithuanian Basketball League (4th place), Šiauliai received the opportunity to compete in 1995-1996. In R.Korach's cup. The first opponent was the Polish team - Wroclaw Slask / Eska. In the second half, Šiauliai showed exceptional performance and defeated the Polish team 100: 88. Full box score: http://www.fibaeurope.com/cid_KNce8jInH7Qj1EsyH5rjn2.gameID_1366-2-A-1.compID_MsfTeemRHYovSUdkYV76x0.season_1996.roundID_2551.teamID_.html 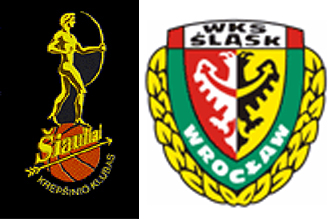 Šiauliai won the 32nd Lithuanian Men's Basketball Cup ("Lietuvos sporto") tournament. The team started from the third stage of the tournament, where they defeated"Olympas" Plungė twice. The final 4 stage took place in Šiauliai. In the semifinals "Šiauliai" defeated "Šilutė" (83:68), and in the finals in a close game - Vilnius "Statyba" (96:88).

M.Žukauskas 45 points in a single game

The single-game points record was set in 1996. April 1st  "Šiauliai" met with the winner of the regular season "Atletas" Kaunas in the quarterfinals and here Mindaugas Žukauskas exploded with 45 points and carried the team to victory. Mindaugas finished with 11 (2pt), 5 (3pt) and 8 free-throws. This performance still remains as a player record of points in a single game.

Sometimes top notch medals can be quite painful. The final four of the LKF Cup took place in Šiauliai and BC "Šiauliai'' competed to defend the cup which was won a year ago. However, the match of the finals was unsuccessful for "Šiauliai'' team and after a close game, "Lietuvos rytas-Statybai" Vilnius won the LKF Cup (65:72).

In the 1999-2000 season, the bronze medals of the Lithuanian Basketball League (LKL) were finally won. The series against "Sakalai" Vilnius was won 3:1 and it was payback to the Vilnius city team for last season's loss for bronze. The key match in this series could be called the first game of the series, where Šiaulia won unexpectedly in Vilnius (77:62).

One of the most impressive and record-breaking performances in the history of "Šiauliai" club is 11 three-pointers made in a single game by G.Pečiulionis. A fateful evening for opponents came in 2001 March.3d. On the home court, visitors of the "Panevėžys" team arrived. In this match, G.Pečiulionis scored 11 three-point points out of 16 attempts and for a long time set this as a record for other "Šiauliai" basketball players (In total, he scored 41 points). This result is also one of the best in the history of LKL. Boxscore: https://geltonajuoda.lt/rungtynes/Siauliai-Panevezys/441

Team finished with 143 points in a single game

Website of the basketball club "Šiauliai" was presented to the media in Šiauliai internet salon "Sala": www.splentas.lt/kksiauliai. Team was the third (after "Žalgiris" and "Lietuvos rytas") among the nine clubs that competed in LKL to start using modern information technologies.

After two consecutive bronze series losses to Alytus' team, "Šiauliai" returned to the third place. After a very competitive series in the key match of the series (fith) in Šiauliai, the team defeated "Sakalai" Vilnius (84:78).

In the semifinals of the FIBA Europe cup (Nordic Conference) in Moscow, Šiauliai lost to Rostov's Lokomotiv team, but in the fight for the third place, they won against “EURAS” Yekaterinburg (86:71). Boxscore:  http://www.fibaeurope.com/cid_KNce8jInH7Qj1EsyH5rjn2.gameID_4153-3-A-1.compID_3PFNKyhLHWIYKHG2fZORy3.season_2005.roundID_4111.teamID_2868.html

The fourth bronze was won at home and “Sakalai” Vilnius were defeated again (3:1). This time, really impressive victory results were recorded: 83:46, 111:77.

The second journey for the bronze medals of the Baltic Basketball League (BBL) was easier than the previous season. This time the team was challenged by the "Nevėžis" Kėdainiai, which was successfully defeated - 76:59. Top performers of the team:  T. Klimavičius (12 points, 15 rebounds) and A. Jomantas (20 points, 8 rebounds, 4 assist). Boxscore: http://bbl.net/en/top/competition/game/?game_id=877803&season_id=17923#mbt:83-400$t&0=1

One of the easiest bronze series took place in the 2005-2006 season when we were challenged by "Nevėžis" Kėdainiai. BC "Šiauliai" won the series “dry” 3:0, and an average difference of victories were more than 15 points.

Although the bronze series of LKL against "Neptūnas" Klaipėda was won with a result 3:0, two away wins were achieved only by a three-point and two-point advantage. BC "Šiauliai" won the final match in Klaipėda (86:84), once A.Čepulis had a huge performance in the second half of the match and scored 27 points.

New Arena of BC „Šiauliai“

After spending thirteen first seasons in the Lithuanian basketball league (LKL) playing in the old “Tauras” gym, the team moved to the new Šiauliai arena. This impressive 100-meter-diameter building, four of the five floors of which are covered with glowing holographic glass, has become the new home of the Šiauliai team. The first official match was played in 2007 September 28 against "Aisčiai-Atletas" Kaunas (W 73:61).

2007-2008 The LKF Cup tournament was successful for the BC "Šiauliai" team. During the final four, our team fell short in the semi-finals of "Lietuvos rytas" Vilnius  (66:71), but in the match for bronze medals they defeated "Neptūnas" Klaipėda with confidence 111:92.

The first LKL bronze medals were won in the new Šiauliai arena, when the "Alytus" club was defeated in the series 3:0. BC "Šiauliai" demonstrated an impressive offence in the series with an average of 95.7 points.

From the LKF Cup final four, which took place in the "Cido" arena of Panevėžys, BC "Šiauliai" returned with bronze medals honors. After losing to "Lietuvos rytas" Vilnius in the semifinals, they defeated "Aisčiai" Kaunas team which was led by Donatas Motiejūnas in the match for the third place. Final result (97:89).

In the match for the LKF Cup bronze, an easy victory for BC "Šiauliai" was predicted, but the winner decided only in the last moments of the match. BC "Šiauliai" took home the victory and the bronze of the LKF Cup for the third time (79:76).

The “Siemens” Arena in Vilnius in 2009-2010. The match of the final four tournament of the BBL for the third place between the Ventspils and Šiauliai teams ended in the victory of Šiauliai 84:83. The victorious shot with the final siren was hit by Vytautas Šarakauskas. The referees counted the shot, but the Latvian club protested, claiming that V. Šarakauskas made the throw after the siren. BBL executives satisfied the Ventspils team's protest and decided to replay the match on Sunday. Despite this decision, Ventspils refused to compete and went home.

The ninth and so far last LKL bronze was won in 2009-2010. season when Utena "Juventus" was defeated in the series with up to three victories. This season the team was driven forward by lead of  M.Kuzminskas, A.Šikšnius, D.Gailius, D.Low, M.Žukauskas, V.Šarakauskas.

2010-2011 LKL "All Stars" day started with the traditional "Sniper" three-pointers contest, in which the shooter of Šiauliai team Edvinas Ruzgas rise up the trophy, surpassing the representative of "Perlas" Vilnius Eimantas Bendžius in the final 23:14.

Representatives of Šiauliai Club were rare guests in LKL All-Star day Dunk-Contest competitions, but in 2013-2014. The team was represented by two very strong highflyers - Modestas Kumpyrs and Travis Leslie. T.Leslie, who has won similar contests in past more than once, this time he did not disappoint the fans as well and became the Dunk Contest winner (in the final stage he defeated the representative of "Žalgiris" Kaunas J.Dentmon).

On January 14, 2015, the only historical-archival page about the basketball club "Šiauliai" was launched on the Internet. The project is designed to acquaint basketball fans with the history of Šiauliai club and the most important facts that will remain in our yearbooks for a long time. We will remember all the players and coaches who played in the club, loud victories and painful defeats, impressive records and anti-records, achievements, people important to the club and other interesting facts.

The „Šiauliai“ team roster were small due to injuries, but team showed an incredible character and in the game for 3rd place of the LKF Cup tournament 77:62 (13:24, 21:18, 20:10, 23:10), was defeated favorite of match "Juventus" Utena club. "Neptūnas" Klaipėda was defeated in the quarterfinals after a competitive game 73:71, and loss to "Lietuvos rytas" Vilnius in the semi-finals.

For the second year in a row, Šiauliai basketball players raised the BBL Champions Cup over their heads. Šiauliai broke the Ventspils team in the second final match at home after a dramatic match with over-time 88:80 (18:17, 14:21, 29:19, 13:15, 14: 8). The Latvian team won the first match in Ventspils - 70:68. Gintaras Leonavičius received MVP of the finals honors.

For the third year in a row - BBL Champions!

Adomas Klimavičius left the president position of the club. He has been leading the Šiauliai Club since its foundation in 1994 June. "It is simply time for changes. I have been thinking about this step for the last four years, but I was still persuaded to stay, - A. Klimavičius spoke at the press conference, handing his basketball to his successor, Mindaugas Žukauskas. "I want to thank all the assistants, club people, and especially the road construction company, who were the main constraints of the club."

The Winner of the three-point contest is A.Čepulis

After many attempts in previous years, Arvydas Čepulis became the winner of the Lithuanian Basketball League (LKL) three-point competition, defeating S. Kulvietis from "Vytautas" Prienai-Birštonas in the final stage 22:17. 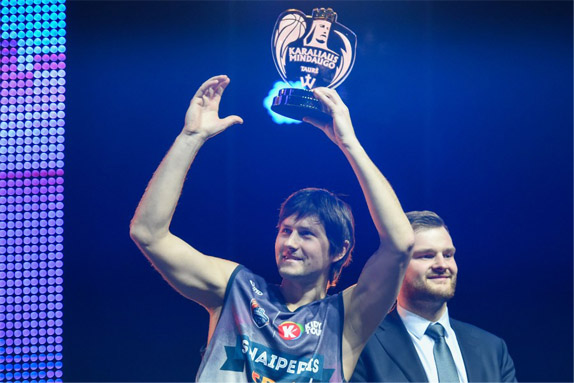 "Šiauliai" starts a new stage of the club, which is led by long-term team player Mindaugas Žukauskas, and Antanas Sireika returns to the position of head coach. 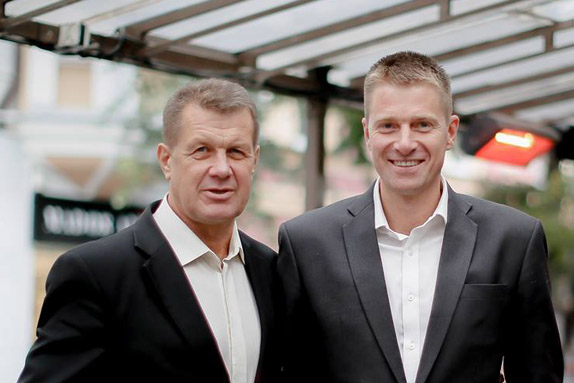 The member of the Šiauliai team Nick Zeisloft improved the record of three-pointers made in a single game by G.Pečiulionis (11 3pts). N.Zeisloft scored 12 three-pointers out of 15 attempts during the match against "Juventus" Utena. Boxscore: https://lkl.lt/rungtynes/119

A book about Šiauliai basketball has been published

In the library of Povilas Višinskis was presented a book "9 decades of Šiauliai basketball: illustrated history from 1925" by journalist and sport historian Arūnas Petraitis. There are big part dedicated to basketball club "Šiauliai".

Delikatesas, which competes in the 2nd Division -  NKL (National Basketball League), has become a missing part of the Šiauliai city basketball pyramid, and from now on promising young basketball players with long-term contracts with the sun city club will be able to improve by playing on the Joniškis team roster as well.

The project lasted for two years.

To mark the 25th anniversary of the club, the team logo is being changed, which is receiving a rather critical response from fans. Vilmantas Dambrauskas, an artist, photographer and designer from Šiauliai, contributed to the creation of a renewed logo of the Šiauliai Club. 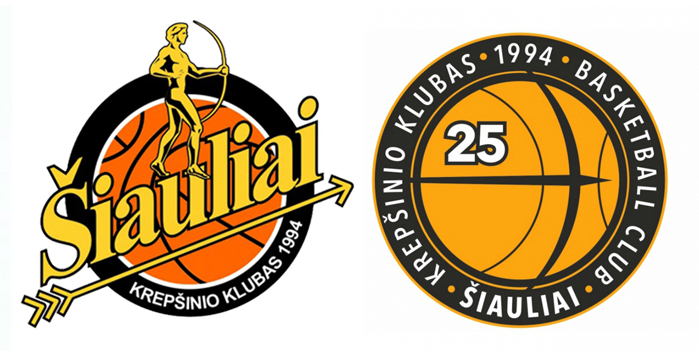 D.Slanina has become director of the club

Donatas Slanina has been appointed as the director of the club. More information in the article. (BC Šiauliai photo) 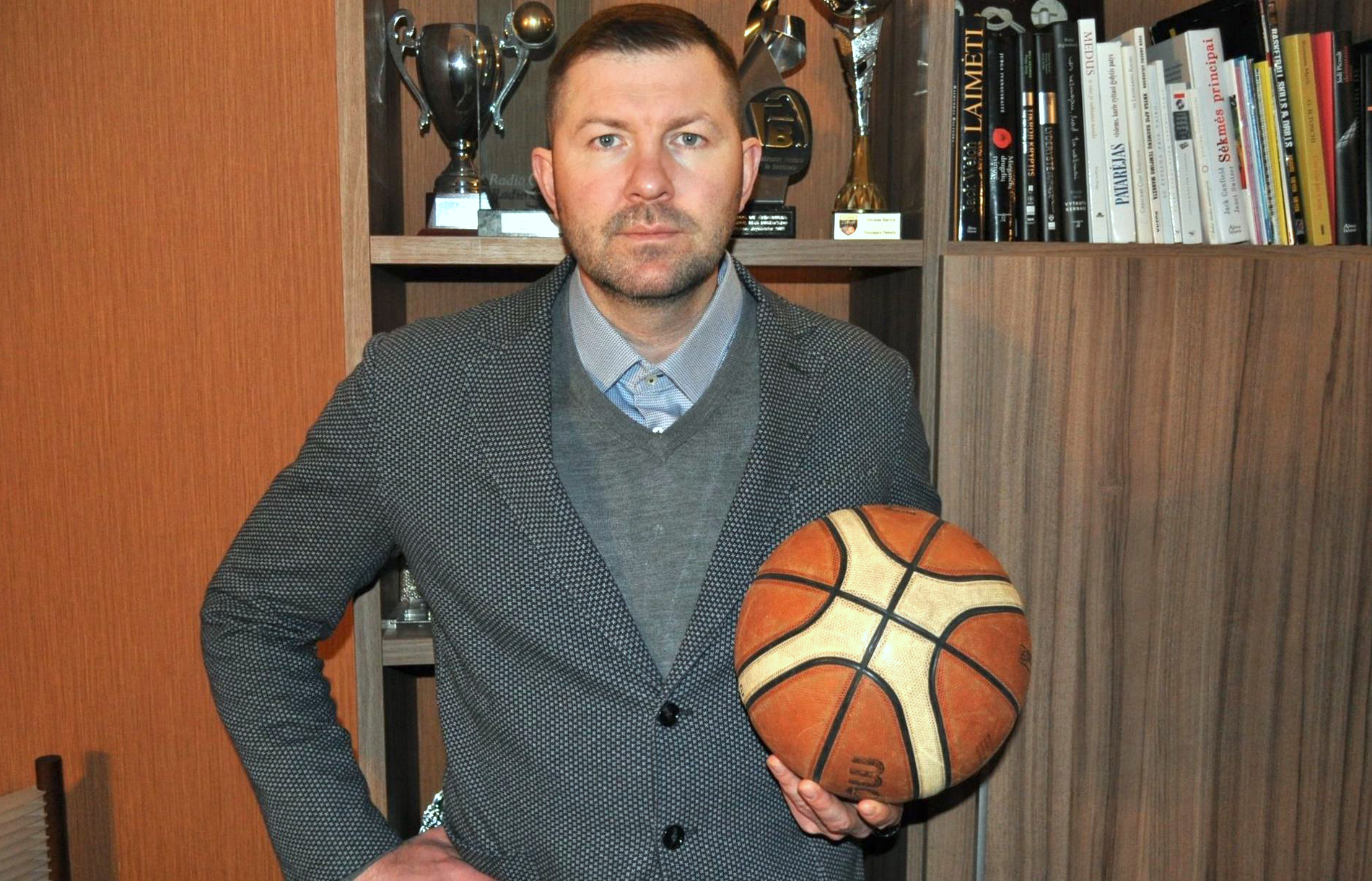 The club's first legionnaire from Iceland, Elvar Fridriksson, made 17 assists and improved the record of D. Sabeckis and K. Hardy (16). An exceptional result was achieved in 2021. May 7 in the match against "Neptunas" Klaipeda. (BC Šiauliai photo) 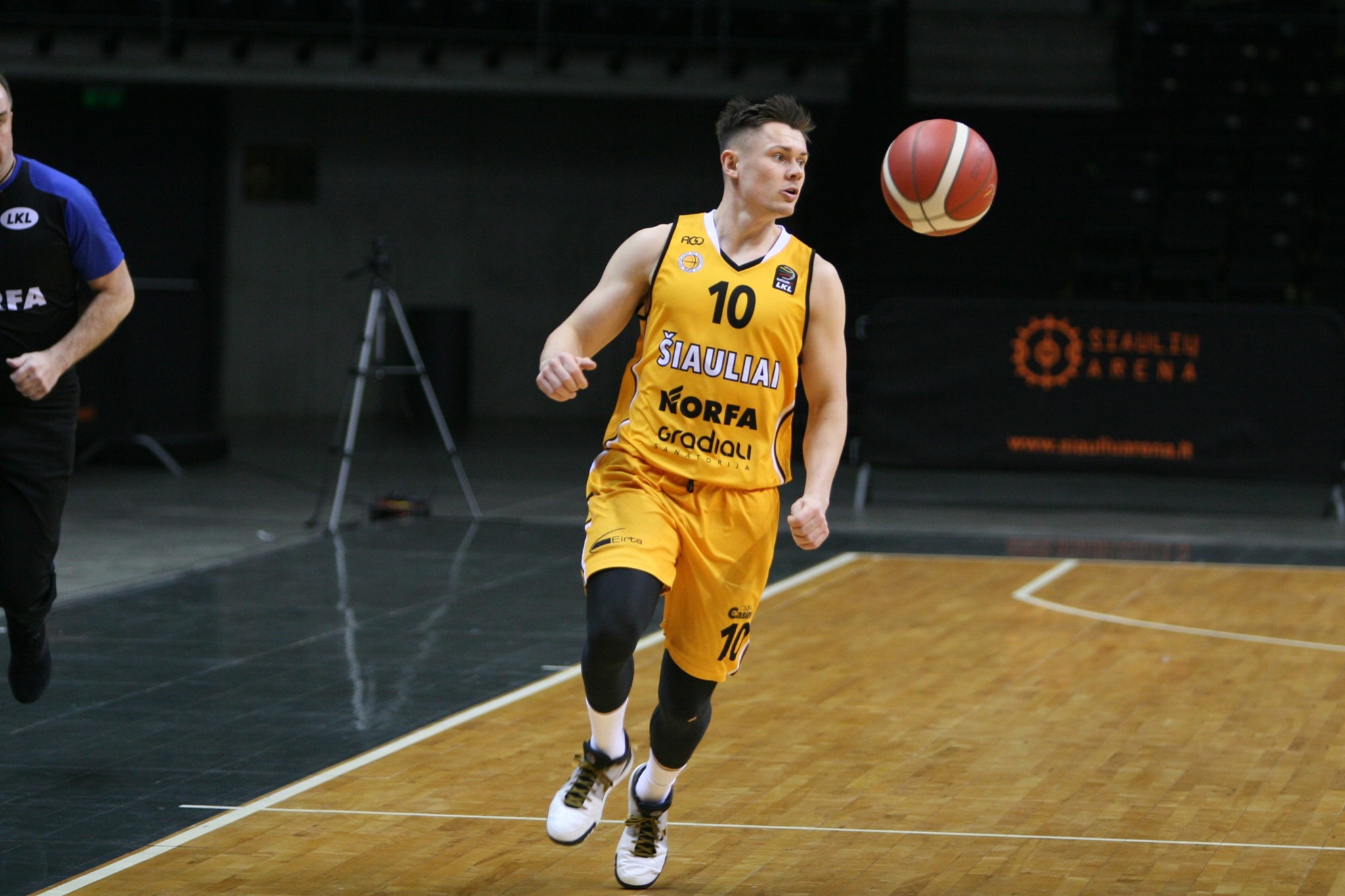